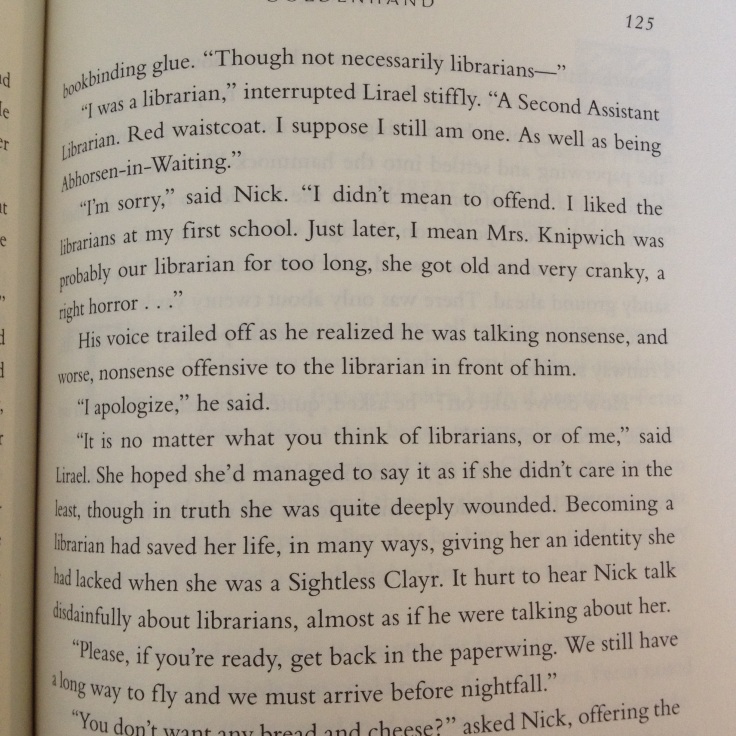 “Many Dead rose toward that sea of stars above.  Dead everywhere, but they were no threat.  They came through the Eighth Gate and waded for a little way, or hardly at all, but soon enough all were caught by the stars above, and were lifted up, to go beyond to the final death from which there was no return.”

Goldenhand is the long-awaited new installment of the Old Kingdom series.  The first book in the series, Sabriel, was published in 1995, so many followers of the series (myself included) have been keeping up with this highly original zombie/fantasy/steampunk world for two decades.  There are three sequential novels and a sort of prequel that falls fourth in the storyline but pre-dates the rest in the timeline. I’ve never read the prequel, Clariel, but I re-read the first three books in the series after reading Goldenhand, and I was surprised at how much I still like Garth Nix’s work after fifteen-odd years.  Young adult fantasy, like a lot of genre fiction, tends to run together and form cliches after you read a lot of it, but Nix’s writing is different, partly because of the death element-the reason I call them zombie fiction- the bad guys raise the dead, and the good guys lay them back to rest.  This is the primary form of magic used in the books, although the magic of the greater Old Kingdom universe is basically an order versus chaos cosmology.  The landscape and culture are also subtly unusual, I suspect because Nix is Australian- for example, they use small magical airplanes to traverse large areas, a mode of transportation I’ve never encountered in any other book, but would make perfect sense to an Australian reader/writer.

Nix’s standout strength, though, is detailed practicality.  These are characters that go through a lot of real-life struggles that are overlooked in most fantasy books, and add an extra layer of reality to the plots.  Lirael gets bitten by mosquitos in Lirael, and has a cold during the climax of Abhorsen.  Simple things, but rarely mentioned in many novels.  Goldenhand doesn’t let us down here.  I was struck by a scene in which the characters had to land a plane to go to the bathroom, and more struck by a main character that is injured the entire time, to the point where it becomes a plot element.  I also enjoyed the way Nix casts more women than men in almost every role, ranging from evil necromancers to town constables to royal guards.  It catches me by surprise over and over, and each time I imagine a man and see a female pronoun a second later, I am amused, chagrined, and impressed.

I wished I’d read Clairel, as well as “The Creature in the Case,” and felt like some elements of Goldenhand felt like they only existed to tie up loose ends in those stories.  The plot also was less coherent and urgent than in the series’ other novels; at one point you think Lirael is finally about to save the day and she simply falls asleep.  The constant procrastination of conflict builds tension until it becomes tiresome… especially on Lirael’s side.  The story alternates between Lirael’s storyline and a nomad of the northern mountains who is trying to reach her with a message, and the nomad’s story is packed with action, although it still feels like she isn’t making much progress until nearly the end.  All in all there’re a lot of detailed accounts of people frantically traveling, and that was a letdown after the strategy, mystery-solving, and battle-fighting of the earlier books of the series.  It felt like Nix was filling up space, but I can’t complain too much; I was glad to see Lirael again.

That said, I won’t be keeping my copy of this book. I didn’t love it enough, and the covers have gotten so much worse after Leo Dillon died… I would have loved to see his illustration for this book.